Luxembourg Minister of Finance in China: strengthening ties between both countries

Pierre Gramegna, Minister of Finance, led a financial mission to Beijing, Shanghai and Shenzhen from September 16 to 20 September. He was accompanied by a delegation composed of a hundred of professionals from the Luxembourg financial sector.

During his bilateral meeting with Zou Jiayi, Deputy Minister of Finance, Pierre Gramegna welcomed the latest measures taken by the Chinese authorities, including China’s removal of restrictions on investment quotas for qualified foreign institutional investors (QFII) and qualified foreign institutional investors in RMB ( RQFII), with a view to further opening the Chinese financial markets. The Luxembourg Minister encouraged his interlocutors to continue the opening of the markets, in order to facilitate the distribution of Luxembourg funds in China.

Opening up and sustainable finance were also the main topics discussed with Guo Shuqing, Chairman of China’s Banking and Insurance Regulator (CBIRC).

In Beijing, the Minister of Finance participated in the inauguration of the representative office of BIL, the first Luxembourg bank to establish a presence in China.

During his mission, the Minister participated in two seminars organized by Luxembourg for Finance targeting Chinese financial professionals both in Shanghai and in Beijing. In his speech, Pierre Gramegna warned of the rise of protectionism and nationalism, and underlined the commitment of Luxembourg and Europe to multilateralism, international investment, and the objectives of the Paris Agreement on the climate. 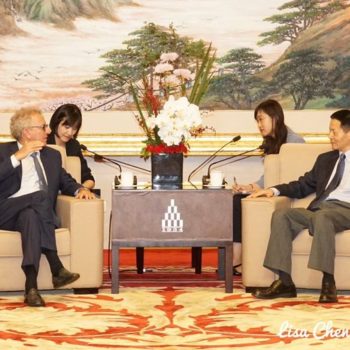