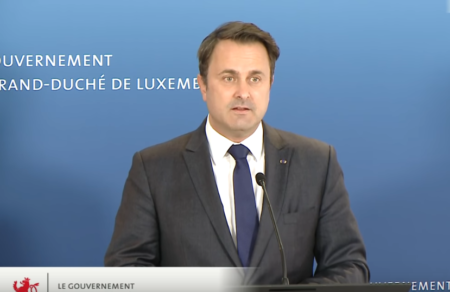 Prime Minister Xavier Bettel outlined the content of the stabilisation programme, which includes different measures adding up to a budget of €8.8 billion, or over 14% of GDP. The initiative testifies to the government’s firm determination to support the national economy. According to the Prime Minister, it is made possible by Luxembourg’s “very performing economy and strong finances”.

The programme has four main objectives:

Minister of the Economy Franz Fayot and Minister of Finance Pierre Gramegna presented the various measures included in the stability programme in more detail.

The measures aimed at preventing the spread of the coronavirus have brought many companies to a complete or near stand-still, and while staff can work from home in some cases, in others, activity has virtually ceased. The government has therefore made the short-term employment mechanism, by which the state covers 80% of salary costs during the period of inactivity in order to avoid that employees are made redundant, widely available. €500 million per month are now being set aside to cover these costs, and an accelerated procedure has been put in place to deal with support requests and process payments.

The government has also reserved a monthly sum of €200 million to provide advance payments of the costs related to the extraordinary family leave that is being granted to parents having to care for their young children at home while schools and childcare facilitates remain closed.

The workforce in Luxembourg is characterised by a very high number of cross-border workers from France, Belgium and Germany who are subject to strict limitations on the number of days per year that they can work outside the Grand Duchy while still falling under the Luxembourg tax regime. As the exceptional circumstances now oblige many of them to work from home, agreements have been concluded with Belgium and France to temporarily wave the limit regarding the amount of days they can work at home without being taxed in their country of origin.

Both small and large companies can apply for financial aid in the form of a repayable capital grant advance up to a maximum of €500.000 aimed at covering operational costs. Micro enterprises with up to 9 employees that have been obliged to stop their activities in order to comply with contamination-reducing measures can also benefit from a one-off non-repayable grant of €5,000.

€4.5 billion have been set aside to improve companies’ liquidity through the deferral of charges and tax payments, while an additional €50 million will be used for immediate VAT refunds. Authorities are also showing additional flexibility regarding the payment of social security contributions.

Luxembourg exporters can still benefit from financial support for international promotion and insurance covering the risks connected with international transactions and foreign investments, even in regions affected by the coronavirus.

The obligation to make an admission of cessation of payments leading to bankruptcy, as well as the forced execution of eviction orders ordered for residential and commercial leases, have been suspended.

In order to help companies that urgently require additional loans, the government has a budget of €2.5 billion that will be used to provide 6-year state guarantees for new bank loans taken by SMEs as well as large enterprises. The stability programme includes additional mechanisms facilitating and guaranteeing bank loans contracted by SMEs.

State-owned bank SNCI offers “special anti-crisis funding” in terms of indirect loans for small and large businesses of amounts ranging from €12,500 to €16 million to cover expenses such as rent and salaries. SNCI also suspends principal repayment on 31 March and 30 June maturities for direct and indirect loans.

Prime Minister Bettel presented these measures as “useful, justified and appropriate” to take the national economy through the current crisis and help relaunch it again. However, he was clear about what is most important for the government: “The absolute priority is people’s health”.