Established in 2009, Invest India is the National Investment Promotion and Facilitation Agency of the Government of India. The objective of the collaboration signed with Luxinnovation is to strengthen and assist bilateral efforts to increase inbound investment activities in both countries, as well as to support and develop cooperation between Indian and Luxembourg companies.

“I am particularly pleased with this new partnership between these two institutions. As our bilateral relations have deepened considerably, among others in the fields of steel, satellites, finance, industrial manufacturing and automotive industry, ICT, fintech and start-ups, this new partnership will be an excellent opportunity to strengthen certain ties, create new cooperation or launch new initiatives,” explains H.E. Jean-Claude Kugener, Luxembourg’s Ambassador to India.

With this partnership, we will more naturally promote and facilitate inward foreign direct investment.

“For a country like Luxembourg, India represents a tremendous economic potential favoured by the excellent diplomatic relations that our two countries have had for a long time”, comments Sasha Baillie, CEO of Luxinnovation. “With this partnership, we will more naturally promote and facilitate inward foreign direct investment, coming from or proposed by Indian and Luxembourg investors.”

“This MoU will be a force multiplier in fast-tracking cooperation and collaboration in technology, enterprise and innovation between India and Luxembourg. It builds on the deep and resilient ties that already exist between our countries and will propel our exchange and interaction to new heights of economic growth,” adds Deeplak Bagla, CEO and Managing Director of Invest India.

According to this Memorandum of Understanding, Luxinnovation and Invest India will endeavour to share, to the best of their ability, their knowledge and economic information in order to facilitate inbound foreign direct investment (FDI) coming from or proposed by Indian and Luxembourgish investors respectively.

This MoU will be a force multiplier in fast-tracking cooperation and collaboration in technology, enterprise and innovation between India and Luxembourg.

Both partners will also exchange all information on the best possible conditions (including legal and regulatory) for investment activities and mutual participation in investment and innovation projects, targeting the most promising national economic sectors. 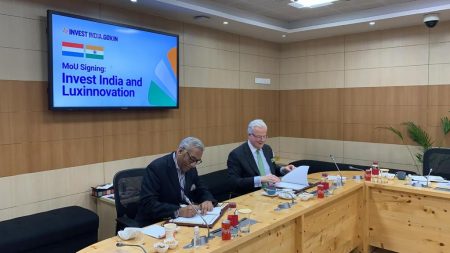 Although diplomatic relations between the two countries were officially established on 1 July 1948, economic relations are much older: Luxembourg’s first vice-consulate in Bombay was in fact created in November 1929, with a view to reinforcing the already extensive cooperation in the steel sector.

Following the opening of the Luxembourg Embassy in New Delhi in February 2002, political, commercial, financial and cultural relations between the two countries have continued to intensify.

In Luxembourg, the Indian community counts in 2020 some 3,000 nationals. It is the 14th biggest community of foreign citizens living in Luxembourg, compared to 27th place in 2015.